Great Plains Journalism Awards, sponsored by the Tulsa Press Club, will welcome Omar Villafranca, correspondent with CBS News in its Southern Bureau, as its distinguished lecturer at its annual conference and awards luncheon May 4 at the Mayo Hotel. 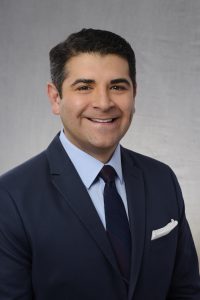 Villafranca’s assignments have sent him to the front lines of the unrest in Ferguson, Missouri, and in 2017 placed him in the path of major hurricanes that battered the U.S. and the Caribbean. He also led CBS News’ coverage of a deadly shooting by a Tulsa County reserve deputy that eventually led to the resignation of the longtime Tulsa County Sheriff.

The Great Plains Journalism Awards is a regional contest honoring print, web, TV and magazine journalists for outstanding stories, photography and design. The eight-state competition includes Oklahoma, Arkansas, Kansas, Missouri, Nebraska, Iowa, North Dakota and South Dakota. Entries are now being accepted for the 2018 contest. Entries must have been published between Jan. 1 and Dec. 31, 2017. Finalists will be announced after an extensive judging process; winners will be awarded on May 4.

Dodd represents national and local media companies in media and intellectual property matters with an emphasis on First Amendment and defamation issues.

Leitch serves as Senior Director of Travel and Adventure. She oversees the digital strategy for NatGeoTravel.com and leads a team of editors, producers, and photo editors who tell stories about far-flung places, fascinating cultures, and amazing adventures across digital platforms.

Kiernan is editor-in-chief the first regional operation of ProPublica. She came to ProPublica from Northwestern University, where she was an associate professor of journalism, focusing on investigative and narrative reporting, and the leader of the program’s social justice and investigative journalism specialization.

Following its mission to promote high standards in journalism, the Tulsa Press Club will present Dan Harrison Memorial Scholarships to winners in five student categories. Students in attendance also will have the opportunity to have portfolio reviews with Villafranca.

Questions regarding contest submissions should be sent to greatplainsawards@gmail.com or call Anne Brockman at 918-585-9924, ext. 226 (9 a.m.-5 p.m.). Complete rules and regulations are available at greatplainswards.org.

Tweet
This entry was posted in 2018 Contest. Bookmark the permalink.